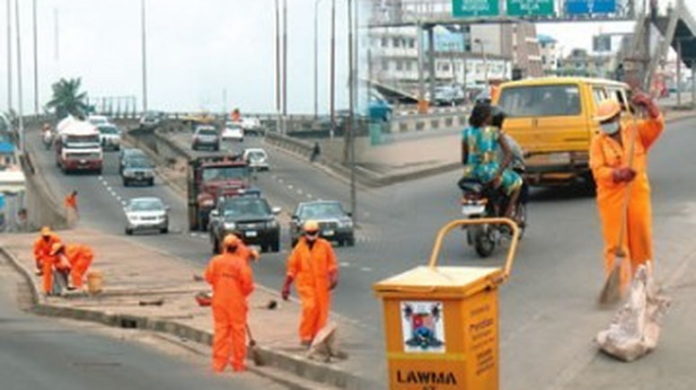 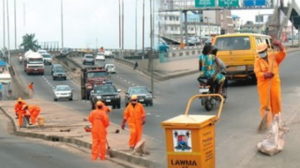 No fewer than 2,178 workers of the Lagos State Management Waste Authority from 66 routes of operations have  protested and quit their jobs in demonstration against their two months unpaid salaries.

The peaceful protest led by the LAWMA contractor, Mrs  Ola Williams, popularly known as Iron Lady, held at the State House, Marina, Lagos, called on the new LAWMA Managing Director, Ibrahim Odumboni, to pay them their pending salaries of May and June as well as for April for some workers.

According to Williams, despite giving in their best in discharging their duties as sweepers of the state, even during the lockdown, those manning the 66 routes under her care from the 673 routes in Lagos are being maltreated.

She said, “We are not treated well. Why would the 66 routes under my care be neglected? They are widows, single mothers and aged.

“We will go nowhere. We must get our salaries. I am ready to die for my people.”

Unanimously, she and all her workers, who sat on the ground outside the State House, chanted: “We quit. We are no longer interested in working. Pay us our salaries.”

While the officials, mostly aged women, decried being neglected and left to starve, they called on the First Lady of the state, Dr Ibijoke Sanwo-Olu, to come to their aid as single mothers and the aged, and left without money to cater for themselves.

“Our First Lady, Mrs. Ibijoke, as a fellow woman, please come to our aid. We need your intervention,” Williams lamented before the officials and armed security men manning the State House.

While speaking to the female government official, who addressed the leader of the protesters, she said: “All we want to know is when he is paying us. We have heard this before. We are no longer working. We resign, and we want to know when he paying us.”

One of the women, Sherifat Yusuf, 60, decried profusely: “I beg you in the name of God, Mr. Governor, please pay us our salary. I have a sick husband to care for. He has stroke. Please pay us our money.”

While expressing her grievance, another woman, Mrs. Selimot Yusuf, 77, called on the state governor to have mercy on them, adding: “Have mercy on us, and pay us our money. We are hungry. Please have mercy on us.”

And in their final submission, the entire workers unanimously dumped their uniform at the State House to further express their grievances.

Earlier, the Lagos State Government had reportedly terminated the contracts of some operators with LAWMA citing violation of terms of agreement with the government.

The contractors, many of whom are politicians, were reported to have defrauded the state government of millions through inflated wage bills of the street sweepers and supervisors under them.

The Lagos State Government, it was gathered, pays the contractors over N560m monthly.

However, a preliminary report of an ongoing audit of the agency revealed that a huge chunk of the money was going to ghost workers and non-existent contractors.