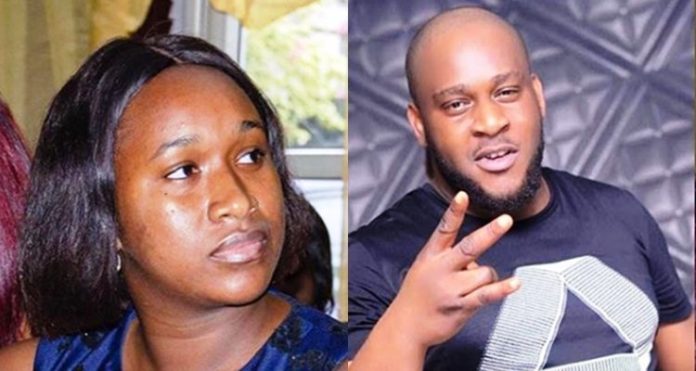 There is a new twist to the tale of Femi Chris Ndukwe, the man who killed his lover , Olamide and then committed suicide.

An account by Adaeze Faith Godwins quoted close family sources as saying that the murder was not related to infidelity on Olamide’s part.

They said there was no DNA test conducted and the paternity of the two children had never been in doubt as they all belonged to one father, Femi.

They alleged that Femi was a serial killer who escaped  from Port Harcourt where he threw his ex girlfriend from a storey building.
Godwins who took to facebook to share the story wrote;  “He happened to lie to Olamide she met him and fell in love with him in her second year, had a child for him then when she finished school a second one came.
Her parents are like you guys are in love why not tie the knot and wedding was fixed for next month. Olamide lives with her parents. The so called Femi asked her to come and visit with the kids.
“Olamide went with her nanny not her sister like the blogs reported. On Sunday he sent his security man around 10 to get him tape which the guy did. In the evening he asked Olamide to come join him in the room, he was almost drowning a bottle of Hennessy XO, he put on music very loud and tied her to the chair and taped her mouth, used a plier to remove her braids one after the other, then he plucked her eyes, stabbed her 11 times before she died, he then drank two bottles of sniper and killed himself….”
She said Femi moved into the house three weeks back and said he planned to settle down with Olamide.
According to her, a  paternity test is being carried out by Olamide’s  parents.
She added, “The said kids all look like their dad but her parents want to set the records straight.
“Femi’s family have been alerted and they are on their way from Enugu.”

Meanwhile, the police have commenced investigation into the incident.

This is according to a statement by the Lagos State Police Command spokesperson, Bala Elkana, on Monday.

The police in the statement said the couple were found dead on Sunday at Road 5, House 16A, Victory Point Estate, Ilasan, following an information received and subsequent deployment of a team of homicide detectives to the crime scene.

The two corpses were removed and deposited in a public mortuary for autopsy.

The statement read in part; “On 21/06/2020 at about 1600hrs, Ilasan Police Station received an information that a couple identified as Olamide Alli ‘f’ 25 years old and Chris Ndukwe ‘m’ 39 years old were found dead in the man’s residence at road 5, House 16a, Victory Point Estate, Ilasan. A team of homicide detectives was deployed to the scene.

“The woman was found lying in the pool of her blood with deep cuts on her head. The man’s mouth was foaming with whitish substance. It is alleged that the man stabbed the woman to death with a kitchen knife and thereafter drank some poisonous substances suspected to be insecticides. Two blood stained kitchen knives, two empty bottles of the poisonous substances, three empty cans of red bull energy drink and a plier were recovered from the scene. The two corpses were removed and deposited in a public mortuary for autopsy.

“In her statement, she was woken up by loud music from the room where the corpses were found, as herself and the kids slept in a different room. It is not yet clear what might have triggered the murder.”

The Commissioner of Police, Lagos State, Hakeem Odumosu, has ordered a thorough investigation into the case. Investigation is ongoing, the statement indicated.