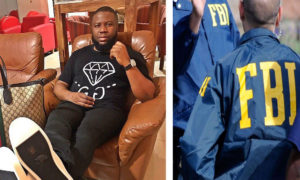 Dubai police has extradited Social media sensation and internet fradusters, Raymond Abbas, also known as Hushpuppi and his partner, Woodberry to the United States of America.

The Dubai police disclosed this in a letter showing FBI’s appreciation of the gesture.

Here is the letter as published by Africa Facts zone;

Hushpuppi, Mr Woodbery and others have been handed over to the FBI and extradited to USA by Dubai Police. pic.twitter.com/w0QzqcmAGY

Hushpuppi and Woodbery were arrested with 10 other suspects on allegations of fraud, involving huge money.

Hushpuppi often posted pictures on Instagram with his luxury cars and private jet.

Police said the raid resulted in seizure of incriminating documents pertaining to a well-planned international fraud worth Dh1.6 billion.

According to Dubai Police, the gang used to hack corporate emails and send fake emails to corporate customers to change money transfers to the gang’s personal banking accounts.

During the arrest, police found a huge amount of data on individuals, companies, bank accounts, credit cards as well as documents of money laundering, online fraud and hacking accounts of victims outside the UAE.

“The forged documents pertained to online fraud outside the country. The fraud was worth more than Dh1.6 billion. We seized more than Dh150 million in cash from them and confiscated 13 luxury cars worth Dh25 million,” Brig Al Jallaf said.