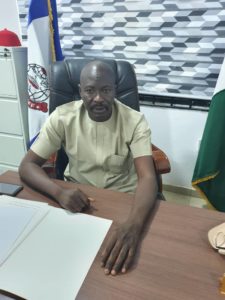 The Head of 100 percent compliance team of the National Association of Government Approval Freight Forwarders, Alhaji Ibrahim Tanko, has accused some corrupt officials among the government agencies and service providers of waging a campaign of calumny against the team.

It would be recalled that NAGAFF inaugurated the team to monitor the compliance level of service providers with  government’s Ease of Doing Business campaign at the Port.

But the team, which has visited some recalcitrant service operators to enforce compliance, has come under attacks by some stakeholders who regarded its operations as illegal and a mere posturing.

But Alhaji Tanko, while reacting to the ochestrated attacks on the team, accused some elements in NAFDAC, SON , terminal operators and bonded terminal operators whom he alleged are corrupt and aversed to complying with the rules of engagement, as those behind these attacks.

He also accused some elements in the freight forwarding industry, whom he described as irredeemably corrupt and thrive on circumventing the rules, as collaborating to frustrate the efforts of the team.

Tanko vowed that no amount of intimidation and blackmail can deter them as the team remained focused in ensuring that all stakeholders play by the rules.

He disclosed that it was the repeated complaints and accusations by government agencies and terminal operators that  freight forwarders are not compliant that made NAGAFF set up the team to self-audit themselves and whip erring members into line.

“The government agencies have asked us to be compliant and play by the rules. That is what we are trying to achieve among our members.

“We have about 40 percent compliance level among our members and hope to get about 50 to 60 per cent by the end of the year.

It is a gradual process”

“We are even organising a three-day seminar for members where we intend to further preach the gospel of compliance to them.

“After that, we shall focus on government agencies with whom we hope to interract on the issue of compliance for mutual understanding and cooperation.

“We have already written to the relevant ones to this effect”

“We have even engaged our principals who are the importers to made correct declarations.

“The officials of regulatory agencies like Customs, NAFDAC, SON and even Police should all play the game by its rules and stop their extortions”, Tanko declared.

He took a swipe at Denca bonded terminal which he claimed has the worse services in the industry  but whose charges are the highest.

“This claim is not only false but unsubstantiated.

“How can you call licensed Customs agents touts?” he queried.

“The problem is that some service providers thought they are above the law hence their acts of impunity.

“But what we are now saying is that enough is enough. We are tired of their  arbitrary charges, lack of capacity and propensity for extortions.

“We are now ready to take our destiny in our own hands” the team coordinator fumed.

Tanko blamed the inertia of Nigeria  Shippers’ Council and the CRFFN for the “mess we are in” and accused them of  failure in their statutory responsibilities to the freight forwarders.

“We have written series of letters to the Council over the challenges of our members in the hands of these operators but they have done nothing.

“The CRFFN cannot claim ignorance of our problems because our members made up  the bulk of the Council’s membership.

“NAGAFF and ANLCA have six members apiece while the other three freight forwarding associations on the Council has one representative each.

“So they are aware of our challenges but the problem is that the Council is not effective.

“It has failed the whole freight forwarding industry which  it’s supposed to regulate.

“What the Council is after is how to collect the POF”  Tanko thundered.

He said that the team will not be deterred  by the unwarranted attacks by those who he said are resisting changes in the industry.

“We are focused and determined to enforce compliance on our members and protest the non-compliance  among the government agencies and service providers.

“No amount of blackmail and intimidation or name-calling will make us to dither our duties.

“I have personally come under attacks and threats because of this exercise.

“But in all of these trials, I remain steadfast ,focused, unwavering and committed to the cause of liberating my members from the shackles of mindless extortions and unwhosome practices of corrupt government agencies and exploitative service providers” Tanko vowed.