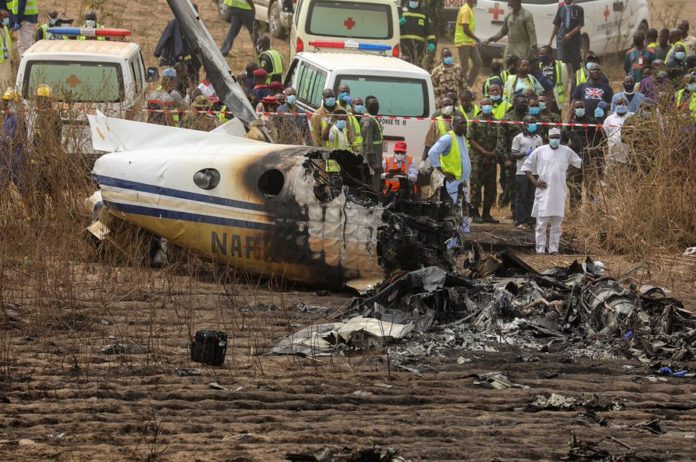 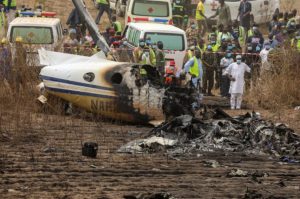 A Nigerian military aircraft has crashed near Abuja airport, killing all seven people on board, according to officials.

According to the Nigerian Air force, the aircraft, King Air 350 crashed after reporting engine failure.

In a statement on Sunday, Air Force spokesman, Ibikunle Daramola, said,  Sadly, all 7 personnel on board died in the crash.

The Beechcraft KingAir B350i aircraft crashed while returning to the Abuja airport after reporting engine failure en route to Minna, he said.

Minna is a city about 110km (69 miles) northwest of Nigeria’s capital, Abuja.

In scrubland just outside the airport perimeter, dozens of military and airport officials picked through the charred remnants of the aeroplane.

Fire engines and ambulances stood by. The smell of burning chemicals lingered in the air but no fire or smoke was visible, a witness told the Reuters news agency.

The air force said an investigation into the crash was under way.

“We should remain calm & wait for the outcome of investigation by the military,” Nigeria’s Minister of Aviation Hadi Sirika said in a Twitter post.

Witnesses at the site said the crash was terrifying.

“Everybody there was screaming full of disbelief,” Olugbenga Alaade, a government employee who said he has worked at the airport for nine years and who saw the crash, told The Associated Press news agency by phone.

Photos of the crash site show black clouds of smoke over parts of the shattered plane. Witnesses told local media they saw the plane struggling to turn around and get back to the airport before the plane exploded.