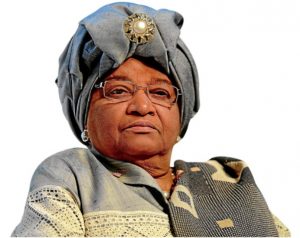 The former President of Liberia, Ellen Johnson Sirleaf  has expressed sadness over the suspension of the Managing Director of the Nigerian Ports Authority, Ms Hadiza Bala-Usman.

Johnson, the first female president of Liberia, led the country for eight years, from 2008 to 2016.

“I urge adherence to the rule of law and fair and equal treatment as the situation evolves.”

The Ministry of Transportation, acting on figures supplied by the Budget Office, had accused the NPA of failing to remit N165bn operating surplus to the Federation Account.

It subsequently placed Bala-Usman on suspension while ordering a probe of the case.

The figures were later found to have been a miscalculation, having been derived from the rough budgetary figures of the company and not from its auditted account.

The Minister of Transportation, Mr  Rotimi Ameachi, was reported to have mellowed down on the non-remittances accusation following this discovery.

According to the Cable, the minister changed the offense to that of  insubordination, alleging that Bala-Usman always reported directly to the presidency, bypassing his office.

He is subsequenlty investigating Bala-Usman for insubordination instead, the Cable reported.