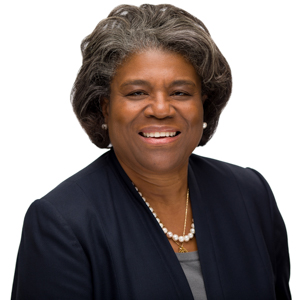 The United States Ambassador to the United Nations, Linda Thomas Greenfield, has said  several global crises, like COVID-19 and climate change demonstrate the interconnection and importance of partnerships in nations around the world.

She stated this during a virtual news conference on Tuesday, May 18.

She said, “As the entire world works to chart a path forward from this past year, the Security Council will be discussing the unique challenges facing countries across the African continent.

“The discovery period will be long and challenging, and there will be threats to Africa moving forward as we look at its trajectory.  But we’re committed to being a partner to Africa as you confront these threats and these challenges, and we believe that the best and the strongest partnerships are built on a foundation of trust and transparency and accountability and areas of mutual opportunity.

“From people programs like Peace Corps, started in the 1960s, to YALI in 2010, we continue as a nation to focus on people-to-people relations.  The extraordinary success of the Africa diaspora community in the United States contributes to and it enhances those relationships, and programs like the President’s Malaria Initiative, PEPFAR, the Millennium Challenge Corporation, build on those partnerships.”

According to her, the United States has worked with the Africa Centre for Disease Control  since it was established in 2016, adding,  “over the last year, I’ve reflected frequently on how important that relationship has been throughout the pandemic together with dedicated significant resources to prevent, detect, and respond to outbreaks of infectious diseases on the continent, create an emergency operations center, and train epidemiologists and incident managers.

“This partnership follows over 20 years of U.S. investment and capacity-building in Africa health security.  Whether on polio, HIV/AIDs, child mortality, Ebola, and now COVID-19, we work together to not only save lives of millions but also build the infrastructure for Africans to tackle future health threats.  And as a continuation of our commitment to global health, yesterday, just yesterday, President Biden announced that we will be donating 80 million COVID-19 vaccines, which will be equitably distributed through COVAX and other partners by the end of June. ”

She listed COVAX – COVID-19 as only one example of the partnership between Africa and the US, saying, “We’re setting aggressive goals to combat climate change, which is a source of conflict and food insecurity across the continent.

“We’re investing in women and girls because we know it’s an important investment in peace and security.  And we’re supporting democracy and democratic values, holding governments accountable, and empowering people economically, educationally, and politically because we know democracy is the most powerful way to prevent all forms of conflict.

” And I just want to conclude by saying the challenges Africa faces are great, but Africa’s promise is far greater.  But we’re committed to working together as partners to propel that promise forward.”