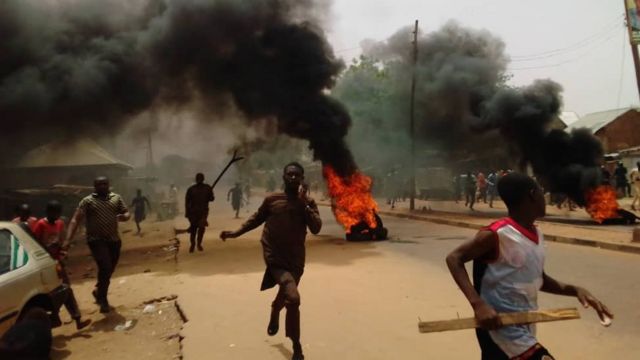 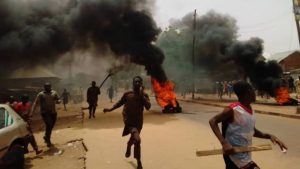 It is very sad, the way things have turned out in Nigeria.  The current situation of the country is to say the least, a heartrending nightmare.

We are torn apart every day, destroyed, devoured, our collective blood shed by wolves that we appointed and pay to administer our collective welfare.

In the most recent national nightmare experienced under the watch of President Muhammadu Buhari, Nigerians woke up on May 14 to the horrible and heartbreaking sight of a student of the Shehu Shagari College of Education, Sokoto State, Deborah Samuel, who was savagely stoned to death and her dead body set on fire by her fellow students with the assistance of Fulani extremists.

The 200 level student was accused of blasphemy for saying Jesus was the reason she passed her exams.

She was then haunted by her fellow students who with the assistance of Muslim fanatics, blocked the entrance leading to the school gate to prevent the cops from gaining entry and preventing the murder.

She was stoned, while people watched and cheered, then her corpse was set on fire.

In the aftermath of the murder, one of the culprits appeared on video, gloating and saying, “I killed her, this is the matches I used to set her on fire.”

It was a sad shame as an attempt to apprehend some of the culprits resulted in riots, burning, looting and more killings by Fulani extremists in the state.

In order to kill a fellow Nigerian, this group of people coined a dichotomy, they gave her a tag, ‘Christian” to them, this name alone makes her worthy of death.

Nigeria is the only multireligious country in Africa where somebody could be condemned to death for being a Christian in the 21st century. This I can swear has only been escalated during the administration of Buhari.

All this while, Buhari who recently paid a visit to the United Arab Emirates  to commiserate with its new president, Sheik Mohammed Bin Zayed, on the passing of his predecessor, Sheik Khalifa bin Zayed Al Nayhyan,  did not utter a word in condemnation of the killing.

Buhari, the president of a country comprising 200 million people, said not a word about the shedding of the blood of this young Nigerian.

He only found his voice when a woman of Northern extraction was killed along with her four children in the Eastern state of Anambra.

He reportedly vowed to fish out the killers.

His announcement was greeted with condemnation and cursing from  longsuffering Nigerians who continue to see him as a tribalist bent on destroying the nation.

According to Nigerians, Buhari has continued to exhibit  his favoritist and tribal governance totally ignoring the pain and anguish of his one track style of governance on the people.

People have long concluded that Buhari is God’s punishment on Nigeria.

The punishment from this particular rod of God is very heavy and everyday Nigerians pray to God to lift Buhari off their necks.

In 2015, this nation went to the poll and elected Muhammadu Buhari, a Moslem(fanatic) of the Fulani extraction.

I remember posting on facebook sometime around that period that Nigeria was about to make the mistake of allowing an extremist and religious  fanatic take over the reins of power, but facebook people shushed me down.

At the time, after openly and covertly using a combination of terror merceneraries from neignbouring countries to harass the sitting government, deploying all sorts of propaganda machinery to label the administration a corrupt one that needs to be overthrown, Buhari put on a cloak of a self-righteous anti corruption tsar whose only earthly possession was a few cows and a bungalow.

Just as we are currently witnessing, about 40 years ago, 1983-1985, Buhari snatched power from a democratically elected government, then plunged the nation into  recession  and unprecedented hardship.

The country has again, under his stewardship, been through two recessions.

This is in addition to dividing Nigeria along religious and ethnic lines.

People will swear that in its sixty years of attaining independence from colonial rulers, the country has never been as polarized as it is currently under Buhari.

Contrary to the image he sold to Nigerians before 2015, Buhari’s anti-corruption war has turned out to be a huge farce and his administration has produced the most corrupt economic drainpipes in the history of Nigeria.

In May 2022, the accountant general of the federation Ahmed Idris, a man appointed and retained by Buhari  was arrested in connection with alleged diversion of funds and money laundering activities to the tune of N80bn.

Asked if he agrees with those who said his government was very corrupt, Babangida said: “But what’s happening now is worse than when we were in power… we are saints when compared with that.”

Babangida who ruled between 1985 and 1993  said while he moved against a former military governor who embezzled N313,000, those who stole billions are walking freely.

Also, in its  2020 Country Reports on Human Rights Practices, the  US Department of State described the scale of corruption in Nigeria under Buhari’s administration as “massive, widespread, and pervasive.”

In Section 4 of the report focusing on Nigeria titled ‘Corruption and Lack of Transparency in Government’, the United States noted that:

“Although the law provides criminal penalties for conviction of official corruption, the government did not consistently implement the law, and government employees frequently engaged in corrupt practices with impunity.